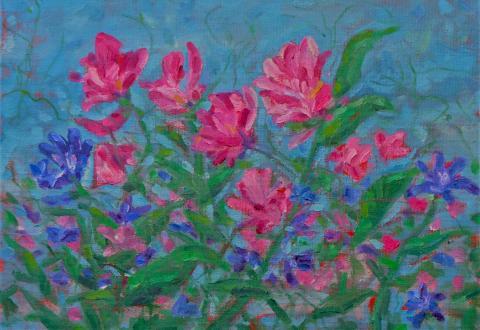 Sweet peas belong to the genus Lathyrus, having as many as 160 species. They are climbing annuals native to the Mediterranean basin and are found in a diverse selection of colors. The first recorded mention of the sweet pea flower was written in 1695 by Francisco Cupani, a gardener in the order of St. Francis who was in charge of caring for the garden at Misilmeri, not far from the capital city of Palermo. In1699, he sent seeds of the plant to Dr. Casper Commelin, a Dutch botanist at the School of Medicine in Amsterdam who published the first drawing of the flower in 1701. Cupani also sent seeds to Dr. Robert Uvedale, a teacher at Enfield in Middlesex, England, who was interested in new plants and plant species. His garden contained many unusual flowers and was well known amongst the botanists of the area. By the early 18th century new species were being bred by several botanists on the British Isles.

Characteristics and Varieties of the Sweet Pea

Sweet peas come in both bush and vining plants in a vast variety of bright colors with fragrant blooms. They grow to approximately four inches high in compact low bush type plants and in climbing vines with gripping tendrils. The original plants were found in shades of blue and purple bicolor flowers but with extensive breeding there are many colors from which to choose. One of the early species that was developed in England by Scottish botanist Eckford was the Painted Lady, an initial grandiflora variety bred for larger blooms and more diverse colors. It was later known as the Antique, a vining plant growing up to seven feet long with very fragrant blooms. The Prima Dona series was developed in England in the county seat of the Earl of Spencer, Princess Diana’s family, and was named the “Spencers.” These plants are also vining with long stems carrying a wide range of flowers with varying degrees of fragrances. Be careful of planting sweet peas too close to other fragrant flowers.  The “Cuthbertson” varieties were developed in the United States to grow in hot climates.

Sweet peas are a cool climate plant and can be put to seed outdoors as soon as the soil can be worked. In warm climates seeds should be planted in the fall to bloom in late winter and early spring. For early blossoms start indoors about six weeks before the last frost. The hard-shelled seeds can be soaked overnight or nicked for quicker germination. Plant seeds in biodegradable pots as the roots do not like to be disturbed. When ready to plant outdoors vining plants should be placed about six inches apart in a sunny area that does not get full sun in the afternoon in well mulched soil to keep the roots cool. They need a support system for the tendrils to grasp, like strings hung down walls or netting. In dry climates use liquid fertilizer approximately every fifteen days. To maintain the plants for the full season be sure to pick the flowers frequently and remove fading blossoms.

Sweet peas are a popular plant with clusters of flowers that produce a wide range of colors growing on stems from sturdy vines. The blooms resemble delicate butterflies and make excellent cut flowers for vases and corsages. While the older varieties of the plant are quite fragrant, newer varieties are not. They are excellent to plant in vegetable gardens as they attract insect pollinators and can be grown with other vining vegetables like beans, vining tomatoes, and cucumbers. They make a nice property border to climb up fences.

While little critters like to eat the seedlings, the seeds of the sweet pea resemble the vegetable sweet peas yet are toxic and should not be eaten. While originally found in Sicily they have been developed in England and have become a cool climate plant. They grow in blues and lavender hues but have been bred to include a rainbow of varieties -- with the exception of yellow. The plant blooms in early spring and produces through early summer and later if summers are cool. Plants can be potted indoors in biodegradable pots to plant outdoors in very early spring for a full season of flowers. Sweet peas are a cheerful flower that will brighten up a garden and accent a patio and are a nice addition indoors in a vase.