An Intro To The Vagus Nerve & The Connection To Kundalini 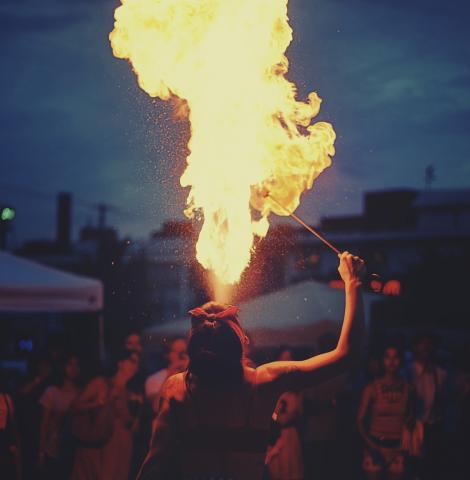 The yogis and rishis of old sat in lotus, immersed in Samadhi, listening to the sounds of the ether and bringing through timeless information from the cosmos. How did they reach this state of peaceful bliss and cosmic consciousness? This article points you in the direction of the mystical kundalini energy referenced in the practice of yoga as well as introduces you to the all-important Vagus nerve, and how these two are related.

With eyes closed, tuned into an awakened pineal gland and attuned to the fires of consciousness from the dark space behind shut eyelids, yogis were able to describe the highly tuned and finely orchestrated physiology of the human body when functioning at optimal performance. This “yogic” state of being is one where physical, mental and spiritual aspects of a person have combined into one, and are therefore not seen or experienced as separate entities.

The description of one experiencing consciousness from within the human body, “viewing the self,” may seem illusive and even incomprehensible to one who has not yet crossed the same threshold of awareness, but to the awakened mind the cues and signposts are but artistic and magical interpretations which allow the secrets of the universe to remain hidden only to those who will not close their eyes in order to access the inner eye.

The mystical kundalini has been described by many as the life force energy that travels up the spine, activating chakra centers and firing up the pineal gland, allowing the practitioner to experience higher states of consciousness. The practice of yoga, especially “kundalini yoga” (which I taught for many years) is aimed at awakening this mystical channel and merging the qualities of the masculine and feminine natures in the body (Ha-Tha: pingala and ida/sun and moon) and therefore harmonizing the left and right hemispheres of the brain for total consciousness.

Kundalini, when awakened and activated, travels up the spine and both purifies and turns-on the seven main vortexes situated along the spine known as chakras. Along the way, kundalini helps to bring prana to the various organs and glands located along this vital channel, helping to maintain the pristine health of the body/mind.

The Vagus nerve is the 10th cranial ventricle, which extends from the colon to the brain with mostly upward firing neurons. It reaches from the position of the first chakra up to the crown. The function of the Vagus nerve (which is interestingly enough really a pair of nerves referred to as One) is to “collect data” from all the organs and glands of the body, including the stomach and heart, thymus and thyroid, and bring this information to the brain for deduction. Sounds a lot like the role of the kundalini energy to me.

In truth, the Vagus Nerve could very well be what the sages of old saw “lit up” in deep Samadhi as the fiery serpent running up the spine to the brain, for yoga helps to regulate the nervous system and therefore activate the wonders and health of this vital nerve. With a healthy Vagus Nerve one feels relaxed, centered, calm and able to navigate life with a sense of trust and feelings of empowerment.

With a disengaged, inactive or impaired Vagus nerve one tends to feel anxious, self-conscious, and to experience a variety of physical symptoms such as stomach disorders, heart irregularities, thyroid dysfunction and various other nervous disorders. It is clear that the Kundalini “serpent” when active and functioning is akin to the Vagus Nerve in full working order. They may be one and the same.

As I learn the language of the Vagus Nerve and look back over my years of teaching yoga, it has become clear to me that it is often essential to have the experiences before the languaging around them -- at least for me it was. I had my kundalini “awakening” long before I knew to call it that, and when I learned the terminology, somehow my experience deepened. Now, again, as I learn the language of understanding the very physical manifestation of the Vagus Nerve it has become clear to me that the language of yoga – of spirit – of the Divine – has made its way into this physical world so much so that we are now able to more fully “own it.” By knowing the power of a healthy Vagus Nerve and how to strengthen it, we are suddenly equipped with very real, grounded information about how to activate our spiritual centers and our life-force energy. They are intimately connected. In fact, there is no way to separate them, as we are realizing through the integration process of Ascension.

As we cross the threshold collectively, through the gates of unity consciousness, and learn to see our bodies as aspects of our spirits, and not separate, then we find ourselves more fully equipped to “live” in an integrated world, one with higher values expressed and deeper love experienced.

Let us look for a moment at the similarities of Kundalini with the Vagus Nerve side by side:

The Vagus Nerve is two nerves recognized as one.

The Kundalini serpent is two psychic channels (ida and pingala) which, once purified and awakened, function as One (the sushumna channel).

The Vagus Nerve runs from the colon to the brain.

The Kundalini rests in the first chakra, found in the pelvic floor at the base of the spine and rises to the pineal gland in the center of the brain.

Both run through the spinal cord.

Both touch and interact with the organs and glands along the spine.

The Vagus Nerve takes information from the stomach and an impaired Vagus Nerve will result in stomach problems. The Kundalini has a main psychic center in the Navel – Manipura. When this center is not activated, the result can be digestive and stomach issues as well as feelings of disempowerment.

The heart is in great communication with the brain through the Vagus Nerve. They are closely connected, as is the heart chakra and the pineal gland, which are interacted with through the kundalini life-force energy.

The similarities and connections are unending between these two aspects of self. It has become clear that the Vagus Nerve is simply the physical manifestation of the Life-force energy known by sages of old as Kundalini Shakti. The Shakti is akin to the fires of our nervous system and as we begin to open ourselves more and more to the increase in cosmic energies coming onto the planet we will all begin to see how prepared our physical bodies are for this increase in Shakti.

Can your nervous system handle the increase in cosmic energy?

If it cannot, then the Vagus Nerve will tell you through various “dysfunctions” which may show up in the physical body in ways such as:

In order to improve these conditions or to eliminate them entirely, the body needs to be able to function with the massive increase in cosmic energy coming onto the planet and into the body. To do this, the Vagus Nerve must be “increased in tone.” One with impaired Vagus capacity is said to have a “low vagustone” and one with a strong Vagus nerve has “high tonal capacity.” This is interesting to me because there are many things which strengthen the Vagus Nerve and one of them is Toning. Also, the sound of the Cosmos, in yoga, is thought to be the Omkar – the eternal OM. It is the creation capacity of the Universe. In the physical body, the OM manifests as the merging of masculine and feminine qualities and as the kundalini serpent rising to meet at the pineal gland in the brain. When the Vagus nerve is healthy and strong one will be optimally functioning and able to not only access more of the brain's capacity, but I believe “show-up” divinely in relationship as a balanced whole being.

Other things which improve Vagal tone include:

Connection to the Earth – walking barefoot in the grass

Sleeping on the Right Side

Sharing from the Heart

Basically, what it boils down to is: those things that make you happy and improve the quality of your life, strengthen your body and boost your life-force energy are wonderful in helping to cope with and regulate the influx of energy flooding our planet now. As we align with the galactic core and the Schumann's Resonance goes way off the charts, the health of our Vagus Nerve becomes vital in channeling our Prana-Shakti/ Kundalini. Maintaining high Vagal tone is the pathway for health and strength as we enter a new era.