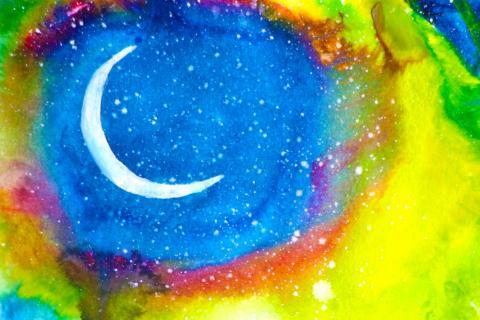 The March 6 New Moon in Pisces falls on a special day—it is the first day that Uranus, planet of radical innovation, will be in the stable, earthy, creative sign of Taurus, where it will remain until 2026. Uranus was last in Taurus from 1934 to 1942, and briefly from May 15 to November 6, 2018. Uranus in Taurus will alter the normal patterns in financial markets and cause fluctuating values of material goods, precious metals, gems, and real estate. Innovative Uranus is in Aries until March 6, 2019, when Uranus will enter Taurus and remain there until April 27, 2026. So, this planetary transition will have long-lasting impact upon our global financial systems and personal sense of values.

The Oceanic Influence Of Pisces

This month’s New Moon in the water sign of Pisces—and coinciding with the movement of radical Uranus into Taurus—portends an even farther-reaching influence of Uranus in March because of the widespread, oceanic influence of the Pisces New Moon. The New Moon initiates the energy of the month. It influences the tides of the oceans and the tides of emotional energy in your body. When the Moon travels through the constellation of Pisces, the Sign of the Fish, it wields an oceanic, subconscious influence on the inhabitants of the Earth. The constellation of Pisces also is ruled by the planet Neptune, the Roman god of the oceans. In conjunction with Uranus newly in Taurus, the reverberations will be quite strong.

In addition, the planet Neptune will be in Pisces at the time of the Pisces New Moon on March 6. Neptune entered Pisces on April 4, 2011 and will remain in Pisces until January 26, 2026. Neptune spends 14 to 15 years in each sign of the zodiac as it moves around the ecliptic of Earth. It wields tremendous subconscious pulls on collective thoughts and feelings.

When Neptune travels through its home sign, Pisces, where it exerts its greatest influence, it produces tsunami-like shifts in consciousness. Notice the accelerated rate of change in technology and basic patterns of living and thinking since 2011! Each day, tidal waves of new information, events, thoughts, and emotions pour into our awareness!  Even a week ago, or yesterday, seems like eons ago. The sense of being flooded by energy, some frenetic waves and some peaceful, calming waves, is the result of the titanic power of the planet Neptune.

Neptune was last in Pisces from 1848 to 1862, coinciding with the California Gold Rush, the start of the American Civil War, the publication of the Communist Manifesto, and Charles Darwin’s theory of evolution. Neptune in Pisces also will focus our attention on the health of our oceans and sea level rise, and other underground resources such as oil and gas. Neptune in Pisces also is affiliated with feelings of compassion and spirituality.

Uranus enters the Sign of the Bull fewer than 8 hours before the upcoming Pisces New Moon. And Neptune conjoins with the Pisces New Moon a mere 44 minutes after the Moon reaches its new phase in Pisces, just over 8 hours after Uranus will have entered Taurus.

As a result of this dramatic interaction of outer planets with the Pisces New Moon, you can expect  a torrent of new beginnings. An onrush of creative energy will stream through your consciousness. Stay aware of the borderline between your conscious awareness of schedules and responsibilities and your subconscious mind of dreams and imagination. The greatest positive changes will occur at the junction of these two worlds—possibly during dream time. Keep a notebook—electronic or paper—by your bedside to record your impressions.

Technology & The Flow Of Information

Technology is a great example of a force that creates a bridge between the world of ideas and mental pictures, and manifestation of those ideas in physical form (text messages and emails, for example). The ubiquity of electronic devices came into full swing as Neptune entered Pisces in 2011, and the pervasive influence of texting has accelerated exponentially ever since. Further, the powerful effect of this communications bridge on influencing human consciousness is virtually incalculable in the way small voices from the farthest corners of the world have had titanic influences on human consciousness. The rate at which we are assimilating knowledge and information is unprecedented in our lifetimes.

Uranus, currently in Aries, also has had a significant influence on the spread of electronic influences on our daily lives. Uranus is the Greek god of lightening and is associated with speedy movements, innovation, and electricity. Aries is enterprising and entrepreneurial. While Uranus has been in Aries, from March 12, 2011 until March 6, 2019, it has stimulated a tremendous public need for individual self-recognition and self-expression—and sales and publicity. This emphasis on expression and communication has dramatically altered our world—what we think about and what we focus on.

While the New Moon and Neptune both in watery Pisces will increase the flow of energy and information around the planet, the entrance of Uranus into earthy Taurus, while innovative and ground-breaking, may also provide just the balance and containment needed by the Moon and Neptune. Taurus cherishes boundaries and structure while Uranus wipes away the old and outmoded to create anew. Expect new boundaries and societal structures to be implemented under the 7-year influence of Uranus in Taurus.

The theme for the Pisces New Moon will be about where you create your own personal boundaries. Are you ready to merge with the oceanic infinite of Pisces or do you want to establish the defined boundaries possible under the influence of Taurus? You will face many questions during the coming month about where you want to draw your lines. Do you want to do what others want you to do? Or tell you to do? Or do you want to make your own decisions? Do you prefer to set your limits before the line is crossed? Or do you prefer to wait to see if the line is crossed—and then push back? Discover your own style under the Pisces New Moon—combined with Neptune in Pisces and Uranus in Taurus.

Also note that communicative Mercury will be retrograde from March 5, the day before the Pisces New Moon, until March 28, just over 3 weeks later. This planetary pattern will orient your mind toward the past. Yet, in Pisces, exact memories can be foggy. Make sure to check your facts and perceptions under this celestial influence. The unpredictable energy of Uranus in Taurus will make you susceptible to unexpectedly changing your mind. So make sure to slow down, check your information—and your source of information, bounce your ideas off of others, particularly those who often have opposing views to your own, and then sit quietly in meditation and visualize the consequences of the action you are about to take. Then make a clear decision.

This is a seminal time when the lines that you draw in the sand have the potential to solidify into concrete. While fluidity will always be there, you also have an opportunity in the coming 7 years to use the earthy influence of Uranus in Taurus to build something of lasting value.