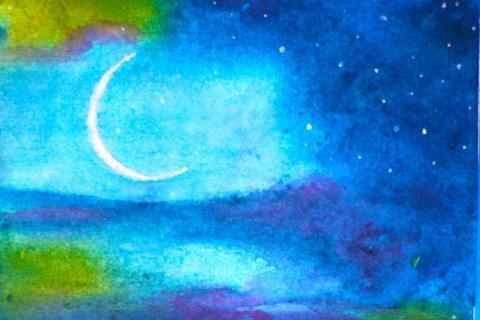 The New Moon in Aquarius on February 4 also corresponds with the Chinese New Year of the Pig, which runs from February 5, 2019, until next year’s New Moon in Aquarius on January 24, 2020. The Year of the Pig portends your potential to indulge in fantasy or to impose the rigors of reality on your life. Try to make this year one where you balance between the two extremes. Begin by clearly viewing the reality of a situation before you take positive, practical steps to create a positive solution. Then, surrender your highest desires to Spirit through prayer, focused contemplation, and positive affirmation.

The New Moon in Aquarius also symbolizes the beginning of our collective departure from the depths of the winter solstice as we begin to connect with our fellow human beings under the Sign of Brotherly Love—Aquarius. The Aquarian Water-Bearer is here to fertilize the earth with new ideas, new connections, and harmonious alliances between people. Aquarius also rules technology—the aspect of technology that enables greater numbers of people to connect with each other in productive ways to create a coherent global village.

Combined with communicative Mercury in Aquarius at the moment of the February New Moon in Aquarius, this will be a season of new concepts and approaches in all areas of your life, which will be readily communicated between people. Prepare yourself during the days leading up to the New Moon by taking an inventory of your life—the aspects that are working for you and that you like, and the aspects that are not working for you and that you don’t like. It’s important to be balanced and objective so you may support your successes—and tackle your challenges.

Begin with one new habit a day under the New Moon and in the 14 days leading up to the Full Moon, a SuperMoon, on February 19. A SuperMoon occurs when the Moon appears larger due to its closer proximity to Earth, which also accentuates the power of your emotional energy to influence your life. With your emotional energy aligned with your daily new-habit-intentions and your positive-habit-actions, you will be planting the seeds for 14 new, positive habits under the fertilizing energy of the Aquarius New Moon.

Then, under the increased light of the SuperMoon on February 19, make a list of the 14 new, positive habits you have just practiced in the previous 14 days. Bring your list outdoors during the evening of February 19—and energize these new influences in your life under the energy of the February SuperMoon. You may enhance the effect by placing a glass of water on top of your new-habits list, and drinking the water after it has been infused with the power of your positive intentions and the energy of the Full Moon SuperMoon. Or, you may place a crystal on top of your new-habits list, and even bring it inside to keep near your bed or on your altar, so the positive emanations from the crystal continue to positively program your subconscious mind.

Also remember that the subconscious mind, which is one of the most powerful aspects of your mind power, responds to pictures and images. So, translate your 14 new-habit list into an image of what you will look like and feel like when you completely embody your 14 new habits. Project this image into the crystal and allow the energy in the crystal to magnify your thoughts as it returns the energy back to you. Keep the crystal close to the place where you sleep, beginning at the New Moon on February 4, and continuing through the Full Moon on February 19, projecting the image of what you will look and feel like in the future with each day's new habit. Then the day after the February 19 Full Moon, wash your crystal in salt water and place it in the Sun. Get it ready for your next round of positive intention-setting at the next New Moon in Pisces on March 6.

Letting Go of the Familiar

This month’s New Moon also corresponds with a t-square alignment between energetic Mars and innovative Uranus in Aries, the fateful North Node of the Moon and transformative Pluto in Capricorn, and the letting-go-of-the-past South Node of the Moon in Cancer. This celestial combination portends a struggle between the imperative of bringing in new ideas and alignments to accomplish your altruistic goals and the desire to stay with what is familiar and comfortable for the sake of security. Ultimately the brave new world will exert the greater magnetic pull. And the powerful energy of Mars and Uranus in the fire sign of Aries this month will make change an even more inevitable consequence. Make your life easier by willingly embracing the unknown with faith and confidence that all is moving to a higher state of brotherly love, cooperation, peace, and harmony, in keeping with the Aquarian ideas that rule under February’s Aquarius New Moon.