Here’s How Slovenia Is Going Green & How You Can Too 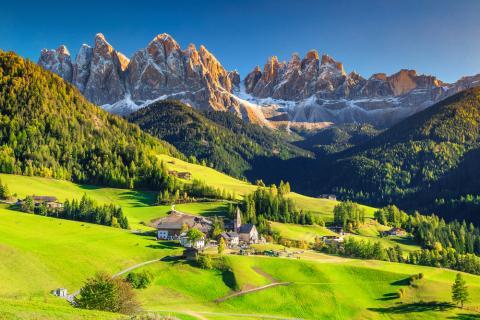 I recently returned from a writing residency in Slovenia, the small country that sits east of Italy and lays wedged between Austria to the north and Croatia in the south. Few people are aware of its existence, and prior to spending several weeks there, I considered myself to be fairly unaware of it, too. Unfortunately, Slovenia deserves a lot more credit than it gets, specifically for its greenness—think low pollution levels, preservation of natural resources, encouragement of biodiversity, and more. Beyond simply making the city look and feel cleaner, green initiatives preserve resources and boost citizens’ health and happiness. Here are 5 ways that Slovenia, as well as many other countries throughout Europe, are greening their cities and how to bring those same concepts back to the United States and throughout North America.

It’s hard to find garbage cans in the capital city of Slovenia, Ljubljana, but when you do, they’re often color-coded and occasionally even staffed—a designated collector will take your trash and place it into the appropriate bins: compost, recyclable glass, plastic or paper, or landfill. Often having the word landfill on garbage bins can be a gentle reminder that all trash simply sits in a landfill until it eventually disintegrates over decades or even centuries—and thus make everyone think twice before using a plastic straw. Slovenia happens to have the largest regional waste recycling center, the RCERO, in Europe, with 98% of the 170,000 tons of waste treated there every year recycled.

Our North American cities can benefit from the same kind of recycling. Many public spaces, like parks, malls, and schools, could probably use separate compost, recycle, and landfill bins to reduce costs at recycling centers as well as encourage proper sorting habits at home.

Start here: learn how to properly sort your waste at home. Consider opting in to your city’s composting program if possible, or choose to build your own.

In general, Europe is much more pedestrian-friendly than North America. Few people drive to the grocery store; instead, they walk to the market. Fewer people still take their car to breakfast or dinner; instead, they bike. Ljubljana is incredibly walking friendly thanks to a car-free downtown. For its initiatives, Ljubljana won the 2016 Europe Green Capital award.

Start here: Even if you like in a vehicle-dominated city, you can help encourage initiatives. Suggest car-free days once per month in your city’s downtown center, or ride your bike to work.

When our residency moved from the countryside of Skofja Loka to the main capital of Ljubljana, I was worried that I’d be left running on city sidewalks and breathing in car pollution. On my first morning there, however, I was surprised to find Tivoli Park, a huge park a quarter mile away from the bustling downtown center. The park was home to several species of birds, nearly a dozen miles of trails, natural fitness centers (complete with wood and stone weights), and a fun playground for kids, families, Slovenes and tourists alike. As the European Commission reports, 75% of Ljubljana is a green area thanks to initiatives like planting more than 2,000 trees, creating five new parks, and promoting forested areas as valuable carbon sinks to combat climate change.

Start here: Even if you can’t get your city to create new public green areas, you can start in your own neighborhood. Encourage sidewalks that are lined with trees, replace your lawn with a native plant garden, or grow your own vegetables on site.

Slovenes are proud of their food heritage, though at first glance you might not expect much: pastries and meats take up the bulk of most local eateries, but there’s still a large focus on market-sold fruits and vegetables, most of which are grown without chemicals. Drive down almost any rural Slovene road and you’re bound to find signs for local honey; a 2017 article estimates that there are more than 90,000 bee keepers within Slovenia, which has a population under 2 million. That’s a lot of bees. Additionally, Slovenia is the only European country to protect its native bee, the Carniolan bee, which means better pollination for Slovene-grown produce thanks to the bee’s sense of orientation and docility.

Start here: Organic produce can be much more expensive than its conventional counterparts, but the benefits are worth it. That said, healthful and locally grown produce can be purchased at your local market for lower prices and most will have booths that sell local honey. Better still, consider taking up beekeeping or purchasing your own mason bees to support biodiversity in your backyard.

When traveling, my first question is almost always, “Is the tap water safe to drink?” Not only is Slovenia’s tap water safe to drink, it’s constantly boasted as fresh, delicious, and mineral-rich. City centers and forest trailheads alike have fountains and springs that can be enjoyed straight from the tap, and it was a rare day when I didn’t see people using even downtown Ljubljana’s water fountains, filling jugs for their at-home water supply. Recently, Slovenia amended its constitution to include water as a fundamental right of all citizens and, thanks to the high alpine regions of Triglav, the water is very high-quality.

Start here: Urge local and federal governments to de-commercialize water and encourage the quality. Check your local water quality and aim to keep it clean by responsibly disposing of (or not using) chemical cleaners and bleaches.

Have you been to Slovenia? What initiatives can we take in our own neighborhoods or homes to make our cities and countries greener and cleaner for us all? Let us know in the comments below!