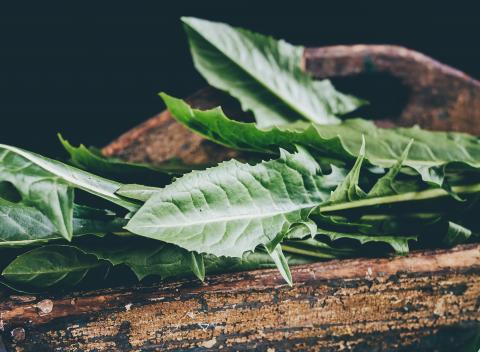 Dandelions are a member of the family Asteraceae, commonly known as the Aster family in the genus Taraxacum F.H. Wigg. or dandelion P., which contains nine species. The greens have been eaten since prehistory and are native to Asia, Europe, and America. The name is derived from the French term “dent-de-lion,” meaning “lion’s tooth” and referring to the serrated edges of the leaves. The plant was cultivated in France in the mid-19th century while the Iroquois people of what is the northeastern region of the United States used the leaves in salads. It was considered a delicacy, harvested in the spring when the plant first emerged. It is a potted herb in Greece and Italy and has been used in Passover Seder as a bitter herb. Dandelions have been used as a medicinal herb because of their rich mineral and vitamin content. They have been valued for their versatility as dandelions are compatible with many recipes and can be eaten raw or as an ingredient in dishes. The plant can be foraged for and collected in its wild state or cultivated in a garden. While popular in other countries, dandelion greens are not used in recipes as much in the United States, probably because of their stigma as a weed.

Dandelion greens can be found throughout the summer. They are a flowering perennial with a thick, long tap root, and a very short stem with smooth leaves that have serrated edges. The flowers are a golden yellow and the entire plant is edible. The leaves can be used raw in salads or included in recipes, much as spinach. Dandelion is valued as a medicinal plant and the roots can be dried and used as a coffee substitute. The plant grows in lawns, meadows, and pastures and the leaves are best harvested when the plant flowers.

1. They’re full of vitamins and minerals.

Rich in nutrients, dandelion greens have been used as a medicinal herb for millennia. They are rich in vitamins A, K, and E; they also contain some vitamin C and folate. Their mineral content includes potassium, calcium, and iron. Other healing substances that are found in dandelion greens include carotenoids like lutein and zeaxanthin.

Dandelions are a hearty addition to a backyard garden for those who want to use the leaves in recipes. They do best in a wild area in the yard where pesticides or herbicides have not been sprayed for several years. They grow from bud to seed in days, yet they can live for years because of their deep root system. New plants can be cultivated by dividing the root system and the strong leaves will emerge through gravel and cement.

Dandelion greens added to the diet will decrease the risk of developing diabetes. The juiced leaves act as a catalyst in the production of insulin, helping maintain low levels of blood sugar. The juice is also a diuretic that helps to remove the blood sugar in the kidneys by increasing urination.

For a strong skeletal system, dandelion greens reduce the risk of age-related diseases because of their high content of calcium and the presence of vitamin C. They also reduce the development of cancers by detoxifying and protecting the body from luteolin poisons that are an essential component of cancer cells. Their rich iron value contributes to the reduction of developing anemia and regulates blood pressure.

5. They keep your liver healthy.