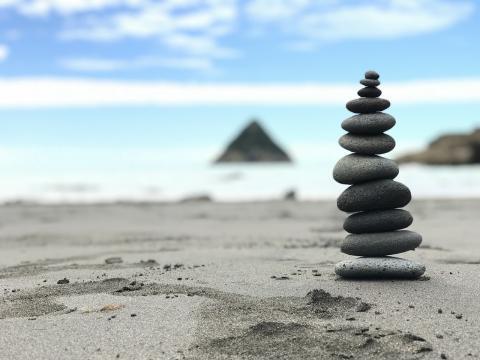 They just looked like basic round rocks to me. It was hard at first for me to categorize them into the same status as other shinier, more “precious” looking stones. However, after holding the set for only a few moments I could feel that these were no ordinary rocks. Boji stones, native to Southwestern Kansas, have the power to bring the poles of the body into balance. This single trait alone (though it is not all these balls can do), makes them worth the investment.

Working with Boji stones is a very metaphysical experience for me. It is the purest and simplest example of how the seemingly mundane can be transformed into a magical formula for healing—an alchemical experience. When simply holding a pair of Boji stones—one is masculine and one feminine—if you tune into what you are feeling energetically, you can literally feel your body coming into balance and harmony.

You will notice that in a set of Boji stones, one is smooth and round (this is the feminine pole) and the other has a slight ridge in the middle of it (the masculine version). By placing one in each hand (which one feels best in which hand is unique to each person) you will begin to feel an inner alignment taking place which was not in effect before holding the Boji stones. Try it! See what you notice.

Personally, as a woman I notice that the masculine Boji in my left hand (the feminine side of the body) and the feminine Boji in my right (masculine side of the body) creates the most balanced, aligned feeling, whereas the opposite placement makes me feel lopsided. However, contrastingly, when placed in the hands of a male friend he found the reversed position to bring him balance.

It has been my experience that Boji balls, due to their masculine and feminine poles, when worked with together, affect the body much like a magnet. The use of magnets on the body has been shown to increase circulation and reduce pain. By placing a set of Boji balls onto the body or holding them in front of the body at various locations, the magnetic effect of the stones can help to bring the body into balance.

Consider that the Earth herself is magnetic and feminine. So, when placing Boji balls on the body for use, it is good to note that when the feminine Boji is below the masculine one (in relation to the earth) the effect is like that of a magnet where likes are attracting. Power is generated, and a feeling of support is felt. Whereas when reversing the poles (where the feminine is further away from the earth than the masculine), an opposites-repel action occurs, reducing the effects.

Using Bojis side-by-side on the body at the same distance from the earth results in a balancing effect and even an opening of the body channels through activating the cellular memory which knows wholeness.

Using Boji Stones on the Body

Placing Boji stones over various centers of the body results in a deeper awareness of, and even an opening of, these specific centers. For example, when positioning the stones over the heart center, the central axis of the spine is brought into harmony with the horizontal axis running across the center of the chest. The sternum area is a center point of the human form and is one reason for the heart’s position there. Boji stones over the heart area helps to balance the circulation of the body as well as the body’s meridian lines and endocrine glands. It assists the chakras in communicating with each other and increases a person’s ability to access feelings of self-love and self-worth, which can become compromised due to closed off body energy channels.

Using Boji stones over the womb space can enhance the opportunity to conceive a baby as it magnifies the body’s capacity to merge poles there (which is, in effect, what conception is).

Boji stones can help balance digestion by placing them over the stomach area—the direction to hold the stones over the stomach depends on the symptom manifesting. If the symptom is that of heaviness, such as with overeating, the use of the bojis should be masculine stone under feminine (again, in relation to the earth). If the stomach is experiencing an ulcer or overly acidic state, it would be beneficial to set up the stones so that the feminine boji is closest to the earth in order to enhance the grounding, neutralizing/healing energy of the earth herself in the stomach.

I think this set of stones is particularly beneficial at this time we are living in. It is common that those focusing on the spiritual to a greater degree than on the physical have highly developed upper chakra centers and very little grounding or connection to the earth. The Boji stones help to reconnect us to the core of the earth and to our lower centers. This is super helpful when attempting to manifest anything, especially materially, as being disconnected from the earth does not support bringing thoughts into form.

Enacting Your Intuition with Boji Stones

Ultimately, the best way to benefit from using these stones is through your own personal exploration with them. This article offers a few guidelines and some inspiration to inspire you in the direction of Boji stones, if it is your time to work with them. If the stones call to you, acquire a set and then spend time with them in order to invite their energies to work with your body and communicate to you in what ways they are able to help you.

If this is your first time working with stones, make it a practice to sit down for ten minutes per day with your stone of choice and practice noticing the sensations you feel in your body and taking note of them. Crystals and stones are powerful companions to take with us into the new world emerging.

Other known uses for Boji stones: