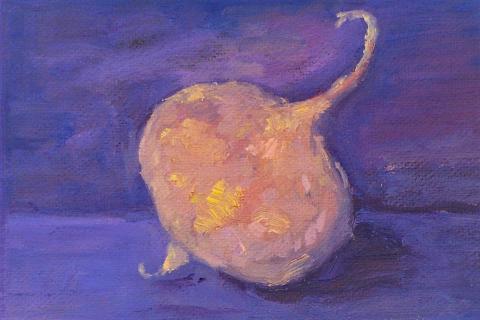 The jicama is a member of the Fabaceae family, commonly known as the legumes family in the species Pachyrhizus erosus. It is native to Mexico and Central America and was used by the Aztec people and other Mesoamericans. The Spaniards distributed the plant to the Philippines where it spread to China, Japan, India, and other areas of southeastern Asia and currently it can be found in many countries throughout the world. Jicama grows best in low land tropical climates not exceeding 1000 feet elevation. It does well in rich, well-draining, sandy soil located in full sunlight. In semi-tropical climates, the tubers can be harvested from 150 to 270 days; in warmer climates they are harvested in approximately ninety days. Jicama is a versatile vegetable that can be eaten raw as a snack or in salads and is used in the preparation of many recipes. Jicama is a highly nutritious food with many healing qualities.

Jicama (pronounced HEE-ca-ma) is a turnip-like vegetable with a mild flavor much like an apple. The juicy texture mimics that of a water chestnut, with white flesh and thin grey or brown skin that must be removed before using. When incorporated into cooked recipes, jicama takes on the flavor of the other ingredients. One of the many uses of jicama is as a thickener in recipes, where it is often known as arrowroot. The plant has a single root tuber with compound leaves having scalloped edges and flowers of brown, purple-blue, or white. The seeds are flat, angular, slightly rounded and either green, brown, or reddish-brown in color. It is important to note that only the tubers are edible and the seeds and leaves are toxic. The nutrients found in jicama include vitamins C, B6, and E; minerals like iron and copper; and amino acids like histidine, threonine, isoleucine, and lysine. These nutrients make jicama very beneficial to the diet and help to maintain health in myriad ways.

Jicama is beneficial to the digestive system because of its high fiber content. Fiber increases the bulk of the stool which helps to move it through the digestive tract, reducing the incidence of constipation. Jicama also is high in soluble fiber known as oligo fructose inulin, which is an inert carbohydrate that does not become a simple sugar, therefore stabilizing the fluctuation of blood sugar which is advantageous to individuals with diabetes.

Because it is rich in vitamin C, jicama increases the efficiency of the immune system by stimulating white blood cells that fight against bacterial, fungal, viral, and pathogenic diseases. Vitamin C is a major antioxidant which neutralizes the effects of free radicals, a byproduct of cellular metabolism, thus reducing the risk of cancer and heart disease.

Jicama boosts the circulatory system because it is rich in copper and iron. These elements are a factor in the production of red blood cells, which provide oxygen to the body. Healthy, plentiful red blood cells  reduces the risk of developing anemia.

4. Vitamin B6 for Brain Function

For maintaining healthy brain function jicama contains a significant amount of vitamin B6, which helps to improve cognitive abilities. It is also essential to break down proteins into a form that can be absorbed into the body (known as amino acids). This helps maintain a healthy metabolism and a balanced organ system.

Jicama is advantageous for a healthy skeletal system because it is high in manganese, magnesium, iron, and copper. These elements are essential for strong bones and teeth, as well as for growing new bone tissue and repairing and healing existing bone damage. Adding jicama to the diet will reduce the risk of developing osteoporosis and other bone diseases.

Jicama has been a staple food for people in Central America and Mexico and has been eaten raw and cooked. It is also the food thickener known as arrowroot. Its mild flavor lends itself to many recipes, and its high nutritional value assists in reducing the risk of diseases like cancer, diabetes, heart disease, brain disorders, and skeletal issues. Just remember: only the root of the plant is edible—the seeds and leaves are toxic.