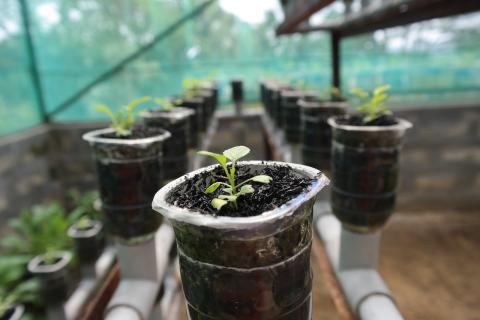 Tucked away in temperature-controlled columns, lit with science fiction-esque radiant LEDs, there are ingenious acts of agriculture being committed in the corners of almost every urban center. One of the strangest brain children of modern science is slowly finding its way from the roofs of Brooklyn, NY, and expansive warehouses in Saint Paul, Minnesota, to lining the walls of misleadingly industrial looking shipping containers across the world. There is a growing attitude that if we are to maintain the traditional system of concrete metropolis, we are inevitably going to let some measure of our synthetic surroundings give way to edible foliage. Hydroponic agriculture may be the divisive element in the battle to find methods of feeding increasingly concentrated populations of urbanites.

While we, as a culture, come to terms with relinquishing romantic images of bright red barns, and cheerfully whiskered chins framing the iconically protruding stalk of wheat, the economics of traditional agriculture are quickly becoming antiquated. As we scramble to contend with a quickly increasing quantity of hungry human beings, traditional ratios of raw energy to food energy become more and more challenging to cope with.

There is a certain air of hopeful futurist sentiment that surrounds the concept of wrestling the fate of the human race away from the torridly unpredictable arms of the natural world. Maybe building skyscrapers full of Eden-like gardens in which our children’s children can frolic could be the next step in the wistful design of a technological utopia. If hydroponics or any of the other methods of new age agriculture is a divisive piece of that puzzle, then one very basic question needs to be asked: is it going to work?

We’ll start with productivity. This one’s a little easier to tackle because the simple answer is…No. Presently, our world faces more of an issue of distribution than of production; while we already produce enough food to feed 10 billion people, systematic socioeconomic inequality still results in starvation being a catastrophic issue in many places across the world. That being said, as the climate, population, water, and energy become more of an issue, there is poignant potential for under-production to be a serious concern by 2050.

When the concept of sustainability is added to this balancing act, things become a bit more complex. Professor Dickson Despommier of Columbia University, considered to be the father of vertical farming—the  model of hydroponic farming that utilizes height as a resource for urban agriculture—acknowledges energy efficiency as a significant issue in the scalability of indoor hydroponic farming. Very simply, sunlight is free, but it does cost money to power the violet hues of modern grow lights. Despommier does, however, continue by stating that with the pace and dedication to research on alternate energy sources, he thinks that energy consumption is the least of the issues preventing hydroponic farming from being the answer we’re looking for. None of these issues are stopping companies such as SproutsIO and Fujitsu from forging ahead, determinedly looking to the positive potential of what hydroponic farming could be.

Beyond the boundaries standing in front of new age agriculture, there are a great number of things that demonstrate how changing our thinking on such topics could be incredibly beneficial to food production. Amongst the pro-hydro rhetoric, we can pick out things such as resource efficiency and nutrition that could quickly outpace the limitations of traditional farming. A lecture from the University of Illinois Extension explores the nuts and bolts of the topic and explains the numerous advantages of taking a scientific approach to farming:

How it all works

Advantages and drawbacks aside, hydroponic farming is actually a pretty astounding feat of technology in and of itself. Techniques range from variations on traditional hydroponic farming, such as ebb and flow systems and drip systems, to some that are a bit more unusual. Aeroponics, for example, is an offshoot of hydroponics wherein the roots of the plant are suspended in air and misted with a nutrient solution, allowing for up to 98% more efficient water usage. Aquaponics is another derivative of traditional methodology, where nutrients are provided to plants by a population of fish living in the supporting water tanks.

Of course, innovative practices aren’t limited to methodology. NASA has been experimenting with aeroponics in space since 1997, and is looking into using hydroponics on the moon as part of a bioregenerative life support system. (Bioregenerative life support is a strategy that could, in time, help support missions to Mars.) Modern understanding of ecology is worked into every nuanced aspect of these practices.

The pH balance of the nutrient solution is continuously fine-tuned with ionized water solutions to maximize bioavailability of nutrients. The level of every nutrient is checked, checked again, and modified. Closely monitored light levels are tweaked to suit plant height; sensors cleaned and calibrated; reverse osmosis systems for water purification maintained. With every inch of these systems humming away to the binary rhythms of their own digital orchestra, one begins to wonder about the ever-diminishing gap between technology and the natural world…

Where this puts us

In hydroponic systems across, and even above, the planet, the buzz of thousands of years of agriscience culminates in an eerie dichotomy between organic and manmade. The thrum of fine-tuned bio-devices combined with the bath of violet light found in hydroponic farms begins to feel strangely alive in its own right. It seems, as humans strive to be independent from our animalistic origins, the closer we get to emulating the organic nature of the very same processes we feel so compelled to control.

The lobbyists of industrial agriculture still hang in a nebulous cloud around Capitol Hill. The homeostasis of our planet's ecology proceeds at an exponential velocity towards something uncertain, but certainly new. While we collectively watch this titanic conflict between Mother Nature and technology, our species still marches hopefully under the banner of futurism. Take away what you will. Personally, I just enjoy the thought of beans being grown in space.

For the moment, however, eat well, drink well, live well.