Your Guide to Summer Flowers: Moonflowers 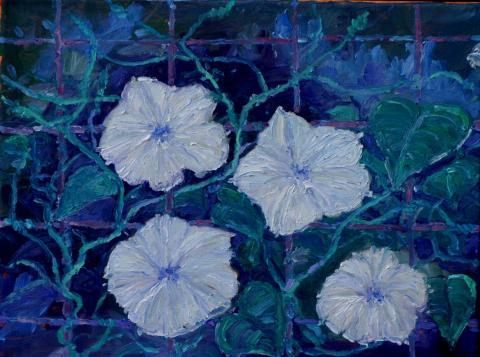 The moonflower is in the family Convolvulaceae, which includes the morning-glory. The plant is native to Central America and is now found worldwide. Moonflowers are tropical plants that are perennials in hot climates. Those plants growing in the southeastern United States form tuberous roots and become perennials; however, those plants growing in Arkansas and cooler climates are annuals. It is one of the night blooming plants that adds a pleasant fragrance to any night garden and attracts night pollinators. The plant has long been used as a medicinal herb and included in many dishes. The leaves and fleshy calyces can be used in salads, dried for future recipes or cooked in stews, soups and curries; however, there is some controversy regarding their toxicity. The seeds can be ingested when they are immature. It is a versatile plant that can add to a patio décor in pots or as a background along fencing.

Characteristics and Description of Moonflowers

The moonflower is a clockwise coiling vine that can grow from eight to more than twenty feet in length. The white blooms can grow from five to six inches in diameter, releasing a sweet fragrant scent. The flowers are trumpet-like in shape and poke out of dense green foliage made up of heart-shaped leaves that grow to approximately six inches across. They propagate by seed after the last frost and attract night pollinators like moths and bats. Mature seeds are toxic and cause hallucination or vomiting that can be experienced after one hour of ingestion. The entire plant is used medicinally for snakebites.

Planting and Maintenance of Moonflowers

Moonflower seeds are very hard and need to be filed, pierced with a knife, or scraped and soaked in water for twenty-four hours before planting. They should be planted after the last frost, an inch deep and four to five inches apart. They need support like a trellis, wall, or fence. They will sprout after approximately three to six weeks when planted in the spring and the vines can be guided into position. They can also be grown to reach a roof by suspending a string and training them to vine on it. In hot climates germination takes place in about a week and the sprouts grow quickly so training them must be done regularly. The plant likes moderately rich soil: if the soil is too rich it will encourage the plant to produce more leaves and less blossoms. Aside from planting the seeds, new plants can be started from the runners. Do not over water the plants. Be sure to remove the entire blossom when it fades or the seed will disburse and take over the area and become invasive.

Since moonflowers are night bloomers they are not pollinated by bees, birds, or other daytime pollinators. Nighttime insects like moths are attracted to the flower -- especially the Luna moth. Bats are also fond of the blooms, which benefits the garden because bats eat a large amount of harmful night insects like mosquitos.

Other Factors Regarding Moonflowers

Moonflowers are usually used as a background for other plants and can be found growing on gazebos, fences, and walls. They are an excellent cover for unattractive areas and can be drapes to form large green curtains. Once the plant is established it does not like to have the roots disturbed so carefully plan a permanent place for them in the garden. While moonflowers are said to be edible there is some indication that they are toxic to the human body. Studies found the plant to contain atropine and scopolamine which tend to effect the nervous system and are hallucinogenic, can cause anxiety, confusion and, in extreme cases, coma. Moonflowers can cause extreme changes in body temperature and raise blood pressure.

Moonflowers are an attractive accent to the garden and other flowering plants with their dense green foliage. They are night blooming plants that attract night insects and bats with large, fragrant white blooms set against their dark and dense green leaves. They do best in hot climates where they are perennials but grow nicely in cooler areas where they are annuals. They are a climbing vine that coil in a clockwise direction and can be trained to follow a pattern. There is some controversy as to whether these plants are edible; in ancient times they were included in the diet but modern studies question their benefit to the body, finding them to contain toxins.