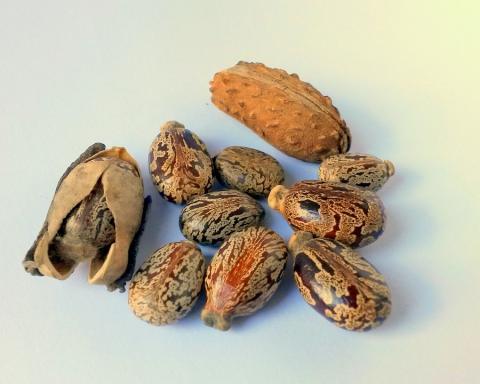 My naturopath recommends castor oil for everything from dry eyes to sore joints to digestive issues. I took her word for it and every time I would use it, it would work — but I wasn’t sure if it was all in my mind or if there really was something special to this sticky, slippery stuff that I just didn’t know about yet.

Castor oil is a thick, almost greasy substance made from “castor beans” which are native to India — although the castor plant is now grown in other countries such as Egypt, Greece and France. In ancient times, castor oil was used as fuel for lamps as well as a popular ingredient in ointments and creams. People of that time were well aware of the healing properties of the castor plant and considered it to be a powerful detoxifier and wound healer.

The ingredient in castor oil that makes it so healing and magical is a compound called ricinoleic acid which is considered to be an effective treatment for ringworm, keratoses, abrasions and chronic itching as well as preventing the growth of bacteria, viruses, yeasts and molds.

Castor oil is often used in “castor oil packs” which are simply a piece of cheesecloth or flannel that has been soaked in castor oil. It is placed on the abdomen, back or any other area that needs attention, covered in plastic and then heated with a hot water bottle or heating pad. You leave the pack on for about 45-60 minutes and then store your cloth away in a jar or container for the next time you need some castor oil lovin’. Although that is how castor oil is typically used, I find just as much success in rubbing the oil right into the skin and then covering it with a towel-wrapped hot water bottle. I find this method to be a lot less messy yet equally as effective as a castor oil pack.

In a 2011 study, it was found that upon application of a castor oil pack on patients who had been experiencing constipation for upwards of 10 years, there was a decrease in symptoms of constipation including less straining during defecation as well as a feeling of complete evacuation after bowel movements. I can totally vouch for this. When I apply castor oil at night, my morning bowel movement is seamless.

Ricinoleic acid is considered to be a decongestant for the lymphatic system, which is responsible for collecting waste and eliminating it from your body. When you massage castor oil onto your skin, you are activating your lymph and increasing circulation to the area which it was applied. It was found in a 2009 study that joint pain was relieved through the administration of castor oil capsules. The patients took 3 capsules daily and at the end of 4 weeks it was noted that a significant drop in osteoarthritic pain was experienced by the test group.

The effect that castor oil has on hair health is undeniable. In a 2003 study, hair strands that were treated with castor oil were compared with those that weren’t and the ones that had the extra treatment were considered to be more “lustrous” and healthy. Although there hasn’t been any real studies proving the efficacy of castor oil on hair growth itself, many people claim to experience fuller hair when massaging the oil into their scalp.

The main reason why I started using castor oil in the first place was for liver health and it turns out there is a study that supports this venture of mine. In a study, 17 patients with chronic fatigue were given castor oil packs for 2 weeks (5 days out of each week), at the end of the test period it was found that liver enzymes and cholesterol normalized in the patients.