Your Guide To Summer Flowers: Geraniums 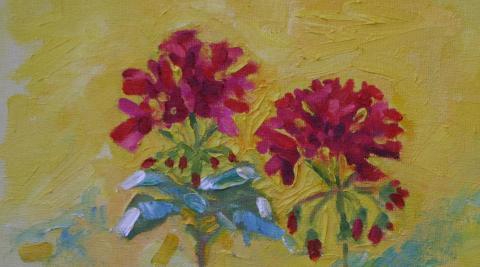 Geraniums belong to the genus Geranium L. – Geranium P. which contains forty-four species. The plant is native to South Africa and can be found throughout the world in temperate regions and tropical mountains. They grow prolifically in the eastern Mediterranean. The petals of the flower are symmetrical with distinctive veins running through them. They grow in pink, white, purple and blue colors and in full bloom appear to be saucer-shaped with five petals to each blossom. The common name was derived in Victorian England and means “folly.” The plant is safe for humans and has been used for healing purposes for centuries. Primarily the oil is extracted and the leaves and flowers can be used for a pleasant and healing tea. The dried flowers and leaves can also be used to make a compress by pouring boiling water over them and using the water after steeping. Geraniums can also be used as a flavoring herb in recipes.

Geraniums are a versatile plant that can be grown in the garden or potted for indoor or outdoor decoration and can be grown from seed or cuttings. Insects have an aversion to geraniums, making them an excellent bug repellent. Geraniums are a beneficial plant and are non-toxic to humans with no known side effects.

How To Grow Geraniums

Growing conditions for an outdoor garden of geraniums require well-drained soil in an area that is exposed to a minimum of six to eight hours of sunlight per day. Geraniums must also be protected from freezing, so in northern climates they should be planted after the threat of frost. Indoors they will thrive in moderate to full sunlight with temperatures ranging from sixty-five to seventy degrees F during the day. They should be watered at the roots, not on the leaves or blossoms.  Planting outdoors should place the plant eight to twelve inches apart.  Since geraniums do not attract insects, they should be placed with other flowering plants that attract pollinating insects.  This confuses them and will encourage the geranium to be pollinated along with the other flowers.

The versatility of geraniums makes them a year round plant. They can be potted during the cold months and transplanted into the garden in the summer. In the fall they can be repotted and brought indoors.

The primary use of geraniums aside from decoration is their repulsion by insects.  They will keep the bugs out of the house. When having an outdoor barbeque place potted geraniums around the patio for a bug-free party

The geranium is a flower of many healing properties. The oil is used as an astringent for bathing and facials. It is also beneficial for relieving the symptoms of PMS and menopause. It heals minor cuts and bruises, hemorrhoids, nail fungus, and eczema, as well as provides a soothing alternative to healing sunburns. It is a safe insect repellent for both humans and animals. The tea is a natural stress reliever, helping to prevent insomnia and reduce the incidence of varicose veins. The geranium also balances hormones, increases dental health and aids in healthy skin.

How To Make Geranium Oil

To make geranium oil infusion, fill a jar with dried flowers and leaves and cover them with organic extra virgin olive oil. Then set the jar out in a sunny spot in the house for approximately two weeks, shaking the mixture daily. Once the oil has absorbed the healing properties of the geranium, strain the oil and store in the refrigerator. It can be used for about three months before another batch must be made.

How To Make Geranium Tea

To make geranium tea either dried or fresh leaves can be used. When using dried leaves, pour one cup of boiling water over two teaspoons of the dried leaves and let steep for five minutes then strain the liquid and serve. To make tea from fresh leaves use one-quarter cup and proceed as with the dried leaves.

Geraniums placed in containers around the patio withdraw extra heat from the reflected sunlight and add to the décor of the patio. They are easily rearranged for a variety of effects. Ivy geraniums do well in warmer climates and add to the dimension of the garden. The aromas of the plants add another aspect to the area and are found in rose, lemon, and mint scents. The dried petals make a lovely potpourri.

Geraniums are a versatile plant used for healing many maladies; they are beneficial to a healthy body. They act as an insect repellent and are a beautiful addition to the garden or potted in the home.