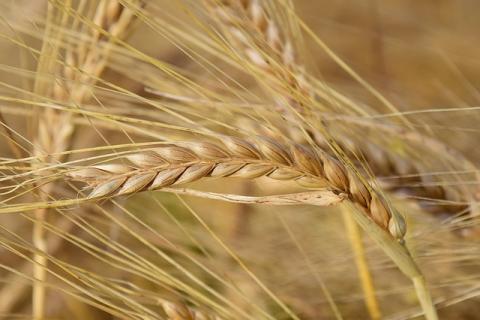 Archeologists have found that wild barley is native to what is termed the Fertile Crescent, the region that covers modern southern Iraq, Syria, Lebanon, Jordan, Israel, and northern Egypt. It was first gathered in 9000 B.C.E. for a food grain and was reportedly first used by the Egyptians as cereal. For millennia, people depended on barley for food for themselves and for their horses. The grain began to be introduced in Europe around 2500 B.C.E. where it was also used for baking breads and cakes. The grain was first cultivated in 1700 B.C.E. as recorded in the Sumerian clay tablets. Columbus brought barley to the New World; the Conquistadors spread the grain throughout South and Central America; and the missionaries introduced barley to California. Barley is a grain with a rich, nutty flavor and a chewy, pasta-like texture that is packed with eighty nutrients. Sprouted, it has a high content of the sugar maltose which is used as a sweetener, and fermented it is used to make beer and various alcoholic drinks. Ayurveda (Barley: The Ultimate Kapha-Reducing Grain) uses it as a control for Kapha and holistic healers have many applications for the grain.

Here are 5 more reasons to add barley to your diet:

1. Barley is an excellent source of fiber that fuels the friendly bacteria in the digestive system. Because of its unique fiber properties and how it reacts in the body, barley creates healthy digestion and thus allows for a healthy colon. This results in lowering the risk of colon cancer and reducing the incidents of hemorrhoids. This insoluble fiber also lessens the risk of developing gallstones as well as lowering cholesterol.

2. Barley has a high content of phosphorous and copper which aids in the health of the skeleton system. It can cure many bone issues and aids in dental health. It is also a natural cure for osteoporosis because of its high calcium content.

3. Barley is also rich in vitamin C, which is conducive to a strong immune system, thus helping the body resist colds and flu. The iron and copper content in the grain improves the volume of red blood cells that prevents anemia and aids in proper kidney function.

4. Barley also aids in healthy skin because it is a good source of selenium, helping the skin to maintain its elasticity and preventing damage by free radicals. It also improves the function of the heart and pancreas and will ward off cancers of the skin, prostate, liver, stomach and breast.

5. Research has proven that barley is effective at controlling Type 2 diabetes because it slows down the absorption of glucose during digestion, thus regulating the insulin levels in the body. It also is filling and helps to control hunger cravings. This leads to weight control and the reduction of fat cells. By lowering body weight it lowers the risk of contracting Type 2 diabetes.

Whole grain foods keep the body working at its optimum and barley is a recommended addition to a healthy diet.