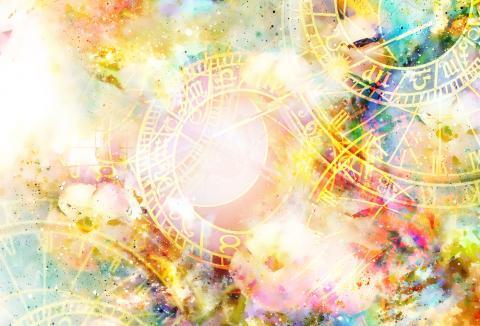 A big distinction between Venus’s retrogression and that of Mercury’s is that you just don’t hear about it from many sources.  It seems like everywhere one turns nowadays, from astrology blogs to pop culture t-shirts, there is something speaking of the ill effects of Mercury being retrograde.  As is commonly known with Mercury, this is when lines of communication get crossed and things tend to become more difficult.  However, with Venus, retrograde is an entirely different story.

I remember hearing when I first started studying Vedic Astrology that if Venus is retrograding through the sign that contains one’s first house in their natal chart, then this can signify a time of a new relationship or just a time of renewing one’s relationship in some capacity.  I can verify this because the one time in my life that Venus went retrograde over my first house was the year I got married.  More specifically, this was happening in the sky the day I got married.

This is the kind of energy that Venus’s retrogression brings with it.  It is about bringing new pleasantries into one’s life, be it new relationships or even new vehicles, appliances, or any type of luxury that makes one’s life easier.  This is one of the reasons Venus retrograde isn’t as “popular” or as commonly discussed as Mercury retrograde: in times when life becomes easier we are less likely to look to astrology for causes.

Now, let’s dig a little deeper into the nature of Venus to see why it brings about the things it does. The sign where Venus sources its energy is the sign of Libra, which can give us a strong foundation in understanding its energy by looking to Libra’s nature.  Libra is about fair trade and valuation and essentially this is all about attaching value to two different things and making sure both sides are equally compensated and balanced.  As simple as this sounds in a world where cash currencies dominate, attaching value to two distinctly different commodities is actually quite an esoteric process.  Analysis alone cannot necessarily bring about something’s value.  In fact, value is determined from an individual’s perspective.  There’s a saying: “one man’s trash is another man’s treasure.”  This is an important part of what the Venusian energy is at its core fundamental nature—the ability to perceive which things in the world will bring about the most pleasure, comfort, joy, and ease to an individual’s life.

Another part of Venus’s core principle nature is that of diplomacy, as in making sure each party gets fair dividends.  This goes right along the same lines as that of valuation, but in this specific aspect it is about not just one determining what they personally need, but that all parties involved get fair and equal portions.  This is a very fundamental part of building a relationship, especially one involving love.  This is why Venus is indicative of things like love-based relationships and especially marriage where two people come together to share their lives with each other.

So with this information in mind, during this time period beginning this week, take note of your own personal valuation process and what it is that you find comfort and joy in, especially involving the things of this world.  This can be about romantic relationships, creature comforts, or anything that makes your life easier.  This can be a time of finding new levels of comfort in life by getting more of this material thing or even can just be about a time of evaluating the things in your life to get more joy out of them.  Either way, I doubt you’ll be interested in reading more astrology articles (unfortunately for me!) during this time as the world will be providing more options at finding peace and ease.  Enjoying life and appreciating the good things is what this time is all about.