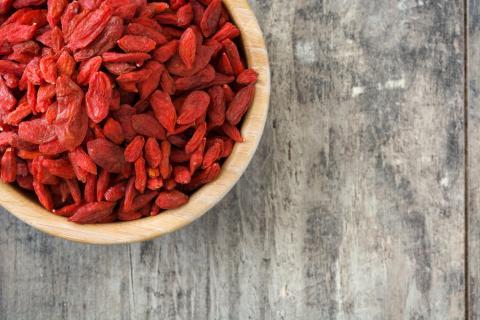 There’s more to those little red berries on top of that smoothie bowl than you may know!

Though widely known as goji or Lycium berries, I like their other common name better: wolfberry. The name wolfberry comes from the Chinese name, gouqizi, with the Chinese character for gou being similar to the one for wolf. In Asia, there are Lycium chinense and L. barbarum, and these are the source of the berries most of us buy at the market. Wolfberries are related to tomatoes and, indeed, look like tiny grape tomatoes.

I first met wolfberry in Anza Borrego State Park in California. We herb students were there to catch the desert bloom, something to put on your bucket list if you’ve never seen a desert in bloom. We made wolfberry flower essence, which is used for protecting one’s “territory,” or holding one’s energy in and keeping others’ out. Wolfberry is similar to but stronger than yarrow in this regard.

Wolfberries are orangish-red because they are rich in pigments. They are chock full of antioxidant carotenoids, one of which actually accumulates in the eye, protecting them from damage and preserving vision. Carotenoids also strengthen capillaries, especially helpful for the tiny, delicate blood vessels found in the eyes and kidneys. Wolfberry’s antioxidant effects benefit the brain as well. They also contain lycopene (same as in tomatoes!).  Lycopene improves heart and blood vessel health, provides some asthma relief, reduces the risk for certain forms of cancer and even improves gum health.

Wolfberries have been part of traditional Chinese formulas for centuries. They’re a yin (moistening) tonic and benefit the kidneys, lungs, liver, eyes, and blood. They also reduce blood sugar. In Japan, the berries are used for chronic low back pain, diabetes, and male reproductive issues (1).  In fact, multiple studies show benefits for sperm health. In Korea, the berries are popular for countering debility and for soothing chronic coughs. The berries are also a well-regarded longevity tonic.

Wolfberries also reduce inflammation, protect cells from free radical-mediated damage, and strengthen the immune system—all while providing a wealth of nutrients (1).  If you’re lucky enough to live where these guys grow, don’t forget to grab some leaves. The young leaves are a tasty bitter green, providing nutrients and also supporting liver detox. The leaves are also useful mashed up as a first aid poultice for bumps, bruises, stings, and the associated pain (2). The root bark was also used traditionally—in this case for arthritis as well as for bringing down a fever, similar to how NSAIDs are used (1).

The native Southwest wolfberries reduce allergy symptoms and relax spastic bronchial tubes (2).  As with Asian species, they’re helpful for issues along the digestive tract. One reference that I checked mentioned that overindulging in the berries may induce dizziness, dryness, and heat (2). This is interesting given that Asian wolfberries are used as a moistening tonic…the opposite of drying.  A difference in chemistry?  A difference in the folks consuming them? I don’t know that anyone knows at this point!

Note that if you’re allergic to foods in the nightshade family, then you’ll want to skip the wolfberries and just appreciate the beauty of the shrubs as they bloom in the desert.