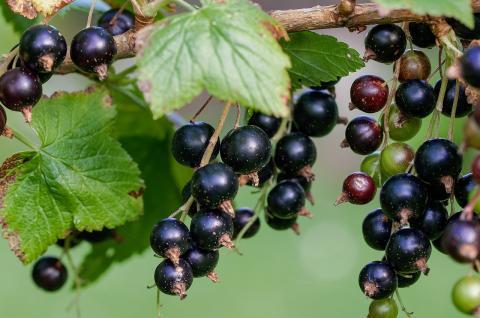 The plant is native to the temperate regions of Europe and northern Asia and was first cultivated by the Russians in the 11th century in the gardens of monasteries, towns, and settlements. The entire plant was used for medicinal purposes as it contains more vitamin C than oranges and was an elixir for sore throats and to reduce fevers. It became a major crop in the United Kingdom and since 1942 has been distributed without charge as a syrup to children under the age of two. While grown in the United States the plant was banned in the early 20th century because it was said to attract white pine blister rust and was considered a threat to the logging industry. In 1966 the ban was modified to the jurisdiction of the individual states.

Black currants grow on shrubs that reach approximately six-and-one-half feet. The berries are a deep, inky blue color with a thick, glossy skin when ripe. The berry is juicy with flesh that has a soft pulpy texture containing multiple edible seeds. They have a strong tannic, complex flavor that combines the taste of raspberries, blackberries, gooseberries, passionfruit, rose, and pine. Only the ripe black currant berries are sweet to eat fresh but they are usually too tart and used for cooking.

1. Black currants, as previously mentioned, are rich in vitamin C. They also contain flavonoids, beta-carotene, lutein, and phenolic acid. Other vitamins that are found in the plant are vitamins A, B1 or thiamin, B5 also known as pantothenic acid, B6 or pyridoxine, and E. Not only do black currants have four times the amount of vitamin C as oranges, but they also have twice the amount of antioxidants as found in blueberries.

2. Since black currants are so rich in vitamin C they can effectively help the body metabolize protein and form collagen resulting in healthy skin and slow down the effects of aging. They are also high in antioxidants and anthocyanins which are an essential aid in maintaining a healthy immune system. As a result of these substances black currants soothe sore throats and reduce the symptoms of flu.

3. Other health benefits of black currants include fighting infection, reducing the risk of developing cancer and heart disease, and preventing inflammation. The plant also contains minerals such as iron, copper, calcium, phosphorus, manganese, magnesium, and potassium. With these essential minerals black currants are significant in the prevention of Alzheimer’s disease and other neurological diseases. They also reduce the incidence of arthritis, gout, liver disorders, and feminine distress, and they are even used topically for healing wounds and soothing insect bites.

4. Planting black currant shrubs require some care. They need to be planted deep to form branches or canes underground. Fruit only grows on newer branches so once the fruiting is done remove one-third of the old branches at ground level to enable the new branches to emerge and fruit. The plant needs an airy location in the sun and well-prepared soil. They should be planted three feet apart in rows six feet apart. They are a cold climate shrub and it is advised to plant in the fall as they leaf early in spring and fruit in the summer. 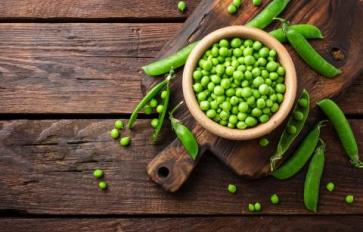