USDA Organic: Behind The Logo 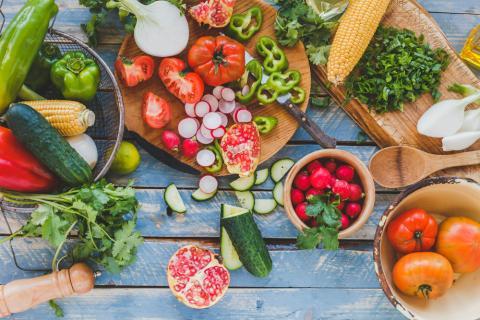 If you’re a conscious consumer, this is probably going to sound familiar to you:

You walk into a grocery store, spirits are high: you’ve strategically avoided peak shopping time so the aisles are largely clear of bothersome, lackadaisical, patrons. You’re determined to execute a quick shopping trip, and you angle your cart decisively towards the produce section. Breezing by the mundane array of fruits and veggies you zero in on the organic options: succinct, well-formatted bios of the local farmers who, using only the most wholesome of practices, have nurtured into existence the selection before you. The dopamine triggered by thoughts of responsible purchasing and healthy eating block any twinge of concern that would otherwise be prompted by the high price point.  You are the “USDA certified organic” only customer. That very fact might actually be hurting the local and organic food movements. Here’s why.

Wendy Wyatt is a hydroponic farmer and agricultural innovator running an operation called Peak Season farms in Durango, Colorado. She spoke with me on the farming practices and culture that fuel the extensive population of restaurants in this picturesque little mountain town.

“It’s funny,” she says about the process of becoming USDA certified.  “I talked to the La Plata County [farm service agency] and they said there isn’t one farmer in Durango that is certified organic: They’re all using organic practices, but they’re not certified because the process is so expensive.”

Looking a little deeper into the requirements for certification, this actually makes a lot of sense. Just the table of contents for the National Organic Program Handbook is 7 pages long. One of the things you find when you begin looking around the USDA’s website on organic certification is this curious choose-your-own-adventure video called “the Road to Organic Certification.” Upon seeing this I was initially actually kind of enchanted: It’s this phenomenal little story about becoming certified organic, told through the lens of “Bruce Baxter” the conventional, large-scale farmer, or “Candice Howard” the independent, small-scale farmer. This tool seems, on the surface, a creative educational option, well put together, and made to serve as a less dense and technical introduction to the certification process. In context, however, the video supports a more insidious narrative.

The characters discuss the USDA certified label as the be-all and end-all of agricultural market forces, and ruminate on the financial punishment they are worried about suffering if they should neglect the certification.  Every other wrong decision leads to the failure of your farm as a business and the dissolution of your livelihood. The certification process is such a complicated, time consuming, and expensive one, it is not an option for many farmers.

Wendy further explained the degree of difficulty one encounters when trying to wade through the red tape between any farmer and the elusive organic label (the misuse of which comes with a fine of up to $11,000):
“They said it was cheaper to get someone to fly in from China to certify my farm organic than it was to get someone from the United States.”

Though certified organic produce is still of unquestionably better quality than that of any industrial farm, it seems that the covenant of USDA certification is pushing the “get big or get out” mentality that has driven the tenor of agrarian culture since World War 2.  But, as is the case with everything, there is always more than one story to be told.

Most everyone, at this point, has encountered the quirky tech visionary and futurist Elon Musk. Pushing to get humanity to Mars, take the driver out of the car, and power the world with the sun, he’s become the face of innovation in the 21st century. What a lot of people don’t know is that Elon has a brother: he’s 6’10”, continuously sports a white cowboy hat, and is selling the world on the single fact that the new age of agriculture is the next tech revolution.

“To give you an idea of the scale of this opportunity, we have a $400 billion global software market.” Kimbal Musk asserted on the TED stage in 2015.  “Food is 10 times that size, and one-tenth of all human productivity.”

While Kimbal Musk does advocate for next-generation farming, he’s not just pushing high-tech solutions to growing concerns about health and sustainability. In his mind, organic is something that needs to be a standard, not the exception, and certainly not a proprietary branding campaign. Looking at organic food and healthy eating at scale, Kimbal Musk is approaching the challenge of disrupting the food industry from a few different angles. Not only is he systematically purchasing farmland and rejuvenating it with organic, sustainable farming, he is building a structure of restaurants, educational outlets, and new age farming operations that together are generating solutions to every major issue that the industry faces.

Our white cowboy hat adorned champion of real food isn’t the only one looking to find their way into the world of positive food production. Online retail giant Amazon recently bought out the leading international organic market, Whole Foods. Amazon, once a niche online bookstore, founded in 1994, is now the world’s largest online marketplace, and is looking for its own piece of the $4.8 trillion food industry. It seems that Kimbal may be onto something when he eagerly talks about the ‘food space’ in the casual vernacular of Silicon Valley. There is certainly something a bit unsettling, understanding that the tech culture, which has arguably done so much to separate us from the natural world, is now setting its sights on food.

Though it seems the world of agriculture is slated for rapid change, the principles of organic farming remain the same and continue to produce the wholesome, authentic products we’ve come to expect from such practices. Organic farming can be defined as follows: No GMOs, no synthetic fertilizers, no synthetic pesticides, nothing fake. Though, as the USDAs exorbitantly lengthy handbook for organic certification would gleefully explain, there is more nuance to the whole thing than just that, but maybe there doesn’t have to be. It would seem that consumer demand and market pressures are, for the first time in a while, actually working for the good of the consumer, as well as the food industry. Though, soon, our purposeful strides through the produce section may be a little less pointedly contrary, we as a global community still have a ways to go. Moving forward, I personally am going to attempt to spend more time at the farmer’s market and less time in the organic foods section of the grocery store. No matter what your next shopping trip looks like, just remember to keep paying attention to what you put in your cart, keep learning, and keep pushing for a better way to eat.