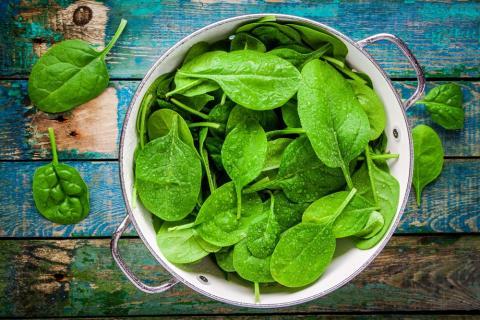 Spinach is a member of the family Chenopodiaceae or Goosefoot family of the genus Spinacia L. or spinach P containing the species Spinacia oleracea L. or spinach P. The plant is native to ancient Persia (now Iran and surrounding areas) and migrated into India, where it was named the “Persian vegetable,” then found its way into China through Nepal in approximately 647 C.E. In 827 C.E. the Muslims, then known as Saracens, introduced the plant to Sicily. In the 12th century the Arabs held the Mediterranean Basin and it became a popular food staple throughout the region. Varieties made their way into Germany in the 13th century and came to England and France from Spain in the 16th century. Spinach became a staple food for the period of Lent and during the reign of the French queen Catherine de' Medici, who was born in Florence, Italy, all spinach recipes became known as “Florentine.”

Spinach is an annual plant grown for its edible and nutritious leaves. It can mature to a height of approximately twelve inches and produces leaves that are six inches in width and grow to twelve inches in length. Its seeds are tiny, only about four-tenths of an inch in radius, and produced from small flowers that mature to only two-tenths of an inch. Spinach has many varieties that can be found in three groups that include savoy, semi-savoy, and flat-leafed. Savoy varieties are curly, wrinkled, and sponge-like in texture. The flat-leafed spinach varieties are smooth and have a larger leaf than the savoy variety. The semi-savoy varieties have characteristics of savoy to a lesser extent and are larger and flatter.

Spinach has a high nutritional value that includes both water soluble and fat soluble vitamins, minerals, and a myriad of phytonutrients. There are vitamins A, B1, B2, B3, B4, B5, B6, E, and K; the minerals found in spinach include iron, magnesium, potassium, calcium, manganese, and copper, zinc, and phosphorus. The phytonutrients contained in spinach include omega-3 fatty acids, dietary fiber, flavonoids, and carotenoids.

How To Grow Spinach

Spinach is a cool climate plant that can be sown in spring, fall, and winter in warmer regions. The planting can begin in spring as soon as the ground can be worked; this is necessary because the plant needs six weeks of cool weather—while germinating the soil must be no warmer than 70ºF (21°C). A spring harvest can be done in colder climates if the seeds are planted in autumn.

Spinach likes full sun to partial shade and well-draining soil. It is best to plant the seeds directly outdoors as seedlings do not transplant well; sow one-half to one inch deep approximately twelve seeds per foot of row or they can be sprinkled over a wide bed or row. Once seedlings reach a height of two inches thin plants to three to four inches apart. The new plants need to be well-watered in spring.

Spinach is a versatile food that can be used in a myriad of recipes. The leaves should be washed thoroughly as they tend to collect sand and soil. When cooking spinach use minimal heat, minimal cooking time, and limited contact with liquids. It is suggested to boil the leaves to release the content of acids, making them sweeter to the taste.

Spinach is an excellent ingredient in lasagna, salads, side dishes, and main dishes. Some serving suggestions are poached eggs on spinach, warm spinach salad with tuna fish, and sautéed spinach with sweet potatoes.