Writing as a Means for Problem-Solving 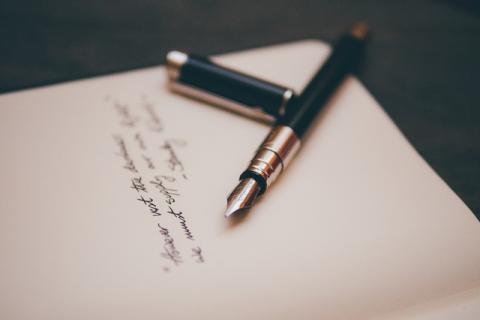 The pen really is sometimes mightier than the sword. - Edward George Bulwer-Lytton

While it is true that the sword can prematurely terminate the flimsy membrane of the pen, the pen is capable of making a timeless impression that has the potential to alter the course of civilizations, as well as benevolently transform individual lives. For example, look at the tremendous, at times, positive influences of the Old and the New Testaments over societies for thousands of years.

I have authored three books, so I am not a newbie to the notion that writing accelerates the whole spectrum of thought power, including emanation from prior nothingness, resolution of existential conflict, improvement of cognition, and retention (especially when notes are written shorthand.) In fact, studies have shown that writing a progress diary can sometimes subliminally influence reduction of diseases, such as cancer.

The other day I was confused and fostered negative feelings about carrying on a relationship with a friend. She happens to be a decent person who has helped me quite a bit. Unearthing a list of 13 reasons why I wanted to terminate my relationship – while still hoping to feel positive regard for her – helped me reflect upon both the lack of candor and dearth of recent progress in our relationship that warrants change.

In short, writing helped me flush out and formulate an opinion about the matter, an opinion that at its inception was such an amorphous notion that it could not be internalized as more than nervous emotion and self-criticism. I was previously confused about a figment that was too vague for description. A weighty, cloudy hang-over of sorts.

I arrived at a valid conclusion (at least, in my sometimes admittedly skewed reasoning) from solidifying thought fragments into rational paradigms.

Writing can also be cathartic, revelatory, inspirational, funny as a Hades paraglider, and downright hip, or as I like to declare, “avant-garde,” even without Toulouse Lautrek’s more tangible artistry.

A Healing Mechanism for Innovation, as well as for Daily Chores

In short, I resolved the aforementioned life dilemma by using writing as a healing mechanism for analysis and reflection. The absence of such a complex means for concrete thought formulation leads to paralysis and continual disarray. This is why it is important for many people to create written lists of tasks they need to do for the day— to prioritize and get them done!

It is kind of a neat mental trick that the pen can rapidly assemble contemplations of the mind. Writing can enable one to sometimes think faster and slice more accurately than a scything weapon. Write on! While the sword can be a Game Changer, the pen is definitely a Game Definer.