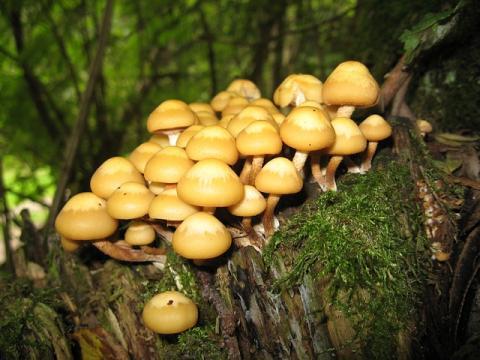 Mushrooms are a common part of many diets around the world. Some are safe for eating, while others can kill us. However, even the mushrooms that don’t harm humans have a potential to kill human cells: that is, human cancer cells. Research shows that the cute fungal foodstuff we call mushrooms have potent chemicals in them that are highly lethal to cancer cells.

Known in the common tongue as Penny Bun, this mushroom’s secret agent name against cancer is Boletus edulis. Researchers studied the effect of taking the chemicals found in Penny Bun and giving them to two human colon cancer cell lines, LS180 and HT-29. To the delight of the scientists, the chemicals extracted from Penny Bun caused the DNA of the colon cancer cells to break apart. The mushroom chemicals turned on genes that tell the cancer cell to self-destruct, while also turning off genes that told the cancer cells to repair themselves. Previous studies showed that Penny Bun had no toxic effects on normal human colon cells, which is good news for those who love to eat Penny Bun.

Breast cancer has a less aggressive form that responds to hormone therapy, such as Tamoxifen. But it also has an aggressive form that is resistant to hormone therapy, because this form does not have a protein called the estrogen receptor-alpha (ER). The more aggressive form, referred to as ER-negative breast cancer, requires different drugs than ER-positive breast cancer. The good news is that the mushroom called Glistening Inkcap, or Mica Inkcap, contains chemicals that kill both types of breast cancer. Known to scientists as Coprinellus micaceus, Glistening Inkcap causes breast cancer cells to quickly die. The higher the dose of mushroom chemicals given, the slower the cancer cells grow and the faster they die. These effects occurred regardless of whether the breast cancer had the ER protein. Take that, resistant cancer!

Hen of the Wood vs. Stomach Cancer

Warm mushrooms have a way of comforting the stomach, especially if they are cooked in a delicious soup. However, the mushroom known as Hen of the Wood does more than give warm hugs to your tummy. The chemicals inside of Hen of the Wood – scientific name: Grifola frondosa – happen to be effective at killing stomach cancer. One of the chemicals is called GFG-3a. As technically complicated as its name sounds, this chemical attacks human gastric cancer cells while they are copying their DNA in preparation for cell division. Every time a cancer cell divides into two cells, it needs to first make a copy of its DNA instructions so that both daughter cells will have their own copy. GFG-3a attacks stomach cancer cells while they are most vulnerable. Terrible for the cancer, good for the person.