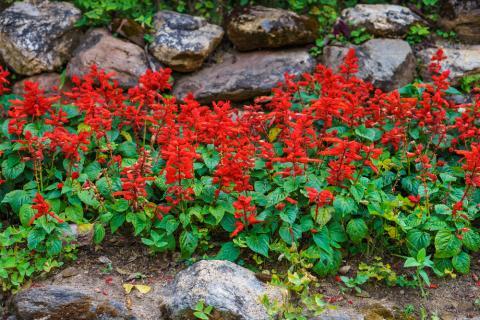 Scarlet sage is a member of the family Lamiaceae or Mint family of the genus Salvia L. or sage P containing the species Salvia splendens Sellow ex Roem. & Schult. or scarlet sage. The plant is native to Brazil and is considered a warm weather annual in cooler climates but is classified as a perennial.

It does well as an ornamental in the garden for borders and edging, in a cut flower garden, or as a container plant. In the garden the plant attracts hummingbirds and butterflies.

Its genus nomenclature is derived from Latin meaning to “save or heal” as some species in the genus are used as medicinal herbs but salvia splendens are primarily a decorative landscape flowering plant. Scarlet sage has been used as a medicinal herb in India for centuries as it contains healing properties and nutrients. The leaves, seeds, and bark are used to heal and treat many maladies.

Scarlet sage matures to eight to fifteen feet in height, producing upright stems that grow to a length of one to two feet. The flowers emerge from terminal racemes blooming from summer into the autumn season. The dense blooms are approximately two inches in length, tubular shaped, and are bright red in color. They stand out against the background of oval leaves that are dark green in hue and mature to a length of about three inches. Aside from red, this species produces flowers that include white, salmon, pink, purple, lavender, burgundy, and orange. The leaves have an aroma that repels pests, deer, and rabbits.

How To Grow Scarlet Sage

Scarlet sage does best in full sunlight which will produce the most blooms. The plant likes well-draining, loamy soil that is fertilized, and deadheading improves the flower output. It can be started from seed or cutting and can be potted for indoor décor during the winter months. Start seeds indoors six to eight weeks before the last frost, and then place either cuttings or seedlings in the ground. Scarlet sage germinates between ten to thirty days and blooms from April to the first frost. It is a non-invasive plant that will reseed annually. It is recommended to prepare the soil before planting in the garden by loosening the soil and mixing in fertilizer. Plant the seeds approximately three-quarters of an inch deep and space them one foot apart. For potted plants place them in a hole twice the size of the container or root ball and space them three to five feet apart.

As a healing herb scarlet sage contains many beneficial qualities. It is effective as an anti-inflammatory and is used as a healing treatment for wounds. It is an antimicrobial herb and has anticoagulant properties. It is also an antihyperglycemic agent that is beneficial to the cardiovascular system and has been used in the treatment of diabetes. The seeds are used as an emetic to cause vomiting, as a treatment for dysentery, to lessen the effects of colic, and to reduce hemorrhoids. The leaves are used in a poultice for healing wounds and are made into a tea for treating coughs and colds. They can be smoked or chewed, resulting in relaxation and has a calming effect.