Seasons: A Short Story On Healing 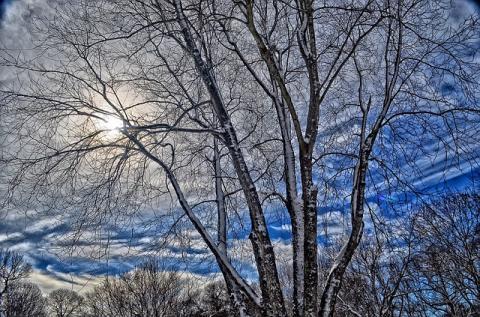 My family and ancestors are from the tropics. The seasons they experienced were the harmattan and rain.  Even though I find comfort and ease in warm weather, I acknowledge that I was raised in New England. I’ve faced many climates growing up on the east coast. I must say, navigating the winters of my life have always been the hardest. The sunlight left too soon and the darkness would stay too long.  The snow could be unbearable. When another six feet of snow came down, I would throw my hands up in exasperation, believing the storms would never end.

Winter has become my metaphor for recovery and accepting the stillness. Like a real snowstorm, we find that everything is covered over, from the branches, to the flowers, to the cars. Even nature’s very own color is covered. Sometimes the startling quietness can bring about those feelings of despair. In my life, I have had trauma, trauma that predates my own birth.  I carry the trauma some of my ancestors surely had with crossing an entire body of water, as well as the despair other ancestors had when they watched their loved ones cross over, uncertain if they would return.

I’m sure their feelings of anger, violation, and betrayal have been passed down to me. I’ve felt it when I watched my own parents exhausted after a long day of weathering constant microaggressions and blatant racism in their work places, or when we inflicted our frustrations on each other because there wasn’t anyone else to yell at.  Managing harsh New England winters was enough of a hassle. Who had the time to manage a winter coming upon the soul? The idea of a physical condition of sadness, or a depression, seemed too time consuming, too self indulgent in a world where we needed to succeed. Success would bring happiness; at the very least it would mean that our labor was not in vain.

A winter of the soul could be prayed away, and if not prayed away then it could be worked away. Just like real snow itself, we could shovel it away and make room to keep moving. After all, sadness was supposed to look and breathe a certain way. The sadness we imagined was a boogeyman that resolved itself to do nothing, and the last thing we were, were a people who resolved themselves to do nothing. I was shocked, when one day, something in me froze, refusing to move with the current of what I believed was true. I was still, and everything was full of quiet.

As a sensitive child, I had personal anxieties about quietness being a problem in a world that demanded me to prove myself. It had been reinforced to me well into my adulthood, often through cruel measures, that my inclination for introspection and solitude was a fundamental problem. Anger or glee was a predisposition people could accept. Quiet made too many people uncomfortable. I learned that quietness and grief were unacceptable, especially if you were a Black girl. A Black girl needed to tell the world what she thought, even if she wasn’t thinking much of anything, except a deep longing for peace.

I had stored the belief in my heart that I was in need of fixing. I didn’t know that winter was inviting me to know myself beyond human prescriptions.

Once I decided to brave the storm, I learned a lot more about myself and my emotions.

I have learned that once you can go into that quiet place, sooner or later, the heart unfreezes and feelings of anger, hurt, and disappointment surface. Just like nature eventually thaws itself out, it is inevitable that the human spirit, if allowed to move fully through its internal conditions, will do the same.

In my own process, I had to challenge the idea that said I was doomed, because my timeline for recovery was longer than expected. I slowly let go of the idea that said emotion was a sign of weakness, and an act of selfishness. I realized that such binary thinking of an either-or existence was its own death. I had to yield to the possibility that I could recover.

We live in a culture that compartmentalizes grief and the need for quiet.  It teaches us to treat sadness with a “pull yourself up by the bootstraps”  mentality.  Medication or the quest for something external is seen as a way to gain peace in an uncertain world. The truth of the matter is that the world has trauma. Whether we watch the news, look at our Facebook feeds, or speak to family and friends, we know that no one walks the planet unscathed.

When winter approaches, we feel a chill that nudges us to take stalk of our lives, and retreat. I hope that if you face a winter, you embrace the season as a quiet process of becoming, allowing you to release old parts of yourself that no longer work, and unearth your deeper self. Recovery is possible, and learning to love in a time of darkness becomes inevitable if you can still the chatter.  At some point it is time for the heart to rest.

Here is a meditation I have been reciting navigating my own winter:

Release me from guilt

Release me from my pathology

Release me from fear

I give myself permission to let go

ALL ARTICLES BY Itoro Udofia